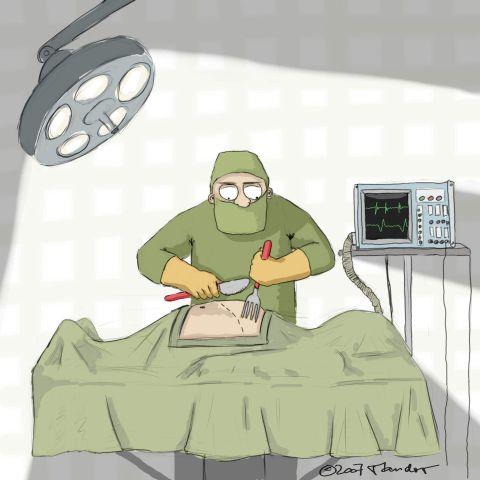 Plastic surgery may help you looking better and prettier. Yes there are so many people who are not patient enough to do several treatments to beatify their selves in a long time. They then seek something instant and quick to enhance their looks and appearance. And they then find that the plastic surgery could make their dream come true in very instant way. They don’t have to wait for so long to se the result. But of course there are side effects from plastic surgery. Especially if this kind of procedure carelessly done by irresponsible people. And here are 5 horrible cases due plastic surgery.

Lauren Yardley of Coventry, England, doing breast implants because they feel confident with her original breast size. Lauren, 25, underwent surgery to increase her breast size from sizes A to DD. However, complications occurred two months after surgery. Her right breast began to swell larger than the left and is very painful. Lauren told by doctors that his body rejects the implant and that as a side effect. She then underwent a second operation to fix her implants, but the problem is getting worse. Who would have thought, the implant is actually leaking from sutures on the skin.

Almost died because of butt surgery

Renee Talley is a former stripper and VIP nightclub hostess in Las Vegas. So eager to have a sexy body, this woman had undergone a variety of extreme plastic surgery risk her life. She said the side effects of the surgery she lived is very painful, maybe even taste like in hell. Women from Fullerton, California, was plant silicone implants in her buttocks three and a half years ago. A few days after implant, Renee started could not breathe and move freely. An incision in the butt also began to open. After four months of treatment in hospital, Renee get a lot of traces of cellulite on her butt which is inflammation of the soft tissue effects, and a life-threatening intestinal infection.

Beshine which originally had breast size B to undergo plastic surgery to change the size to Z. Although she claimed to have never felt the back pain or find it difficult to walk with breast magnitude, Beshine have difficulty finding clothes that fit to her. Instead of making Beshine look sexy, her breast size actually looks very scary.

Getting older after plastic surgery

Joan Van Ark is one of the Hollywood actresses who claimed to be sorry for undergoing cosmetic surgery which only made her face look strange. She cannot even hide the traces of the operation on her face that made her look older.

Was known as one of the most beautiful woman in Italy, Romanini Michaela’s face beyond recognition precisely because she lived a surgical procedure. Instead of more beautiful, Michaela’s face looks very terrible and strange. Her lips were very prominent and her eyes look scary.